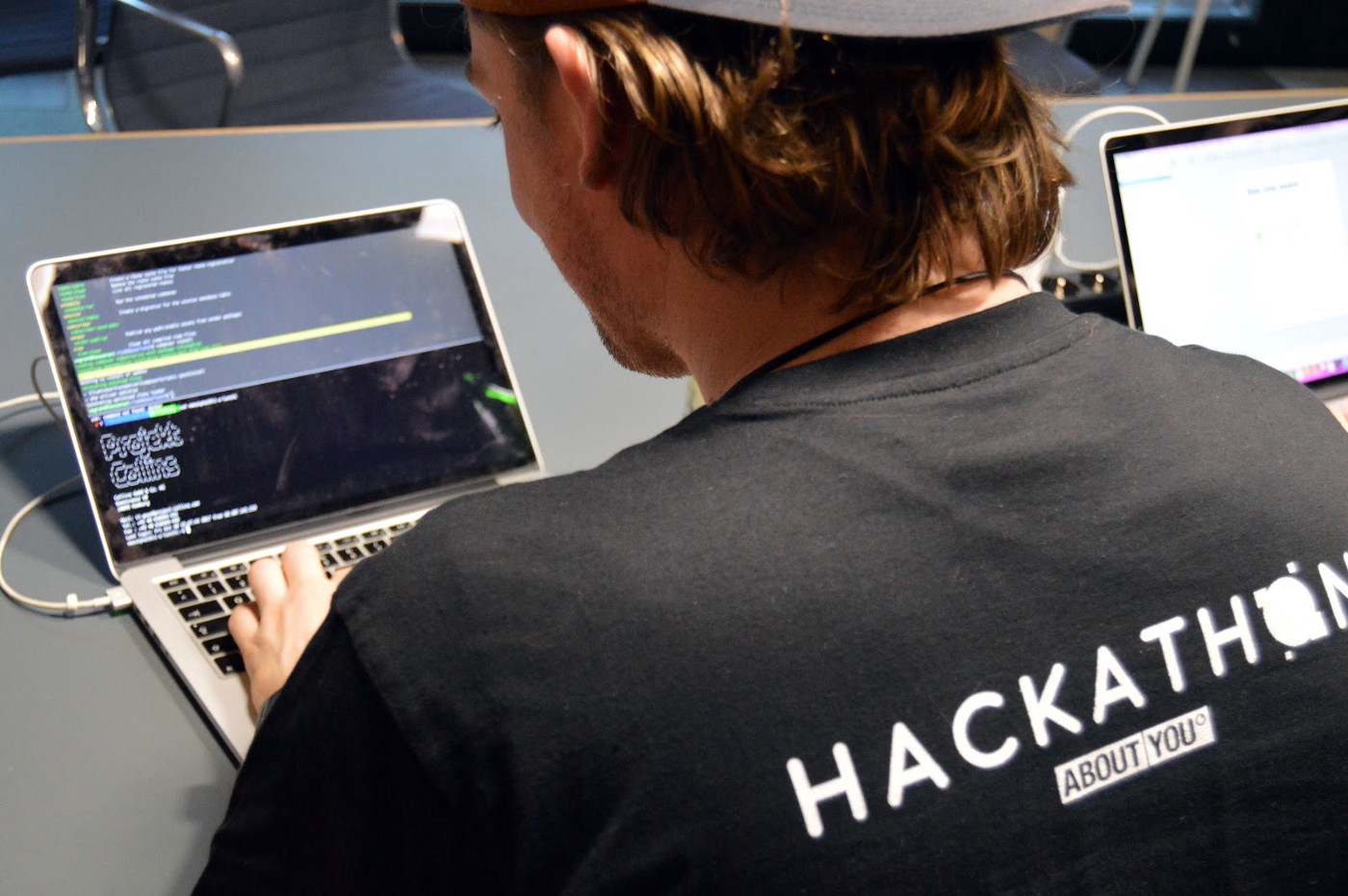 All developer got a special hackathon-shirt

INSIGHTS Google Home, Alexa and connecting employees at ABOUT YOU

Why our second hackathon was awesome:

We just had our second ever hackathon and you know what? It was great
– again! Not just because of the typical German ‘halbe belegte Brötchen‘! Read more about our culture and the projects we tackled.

At ABOUT YOU, we work in a unit-based manner and are quite focussed in our own departments. Because of this way of working, the hackathon at the ABOUT YOU offices is such a cool opportunity to meet and engage more with your colleagues from different units, to build something fun together and to ignite a synergy that supports your designated project for the day.

But these perks of a hackathon are no news to anyone, right? Since this was only our second hackathon, it’s still a new and exciting experience for us.

In preparation for the hackathon, the 24 participants were asked to think about a product they always wanted to create or something their team would really need but doesn’t have the time to build. And they did not disappoint! People came up with amazing ideas and the project list was full with really cool proposals. While having a good breakfast with cinnamon rolls, croissants and many many german-style “Halbe belegte Brötchen” on this first day of the hackathon, the teams discussed the different topics and agreed on the projects to work on for the next two days!

We tackled quite cool topics in our projects. Here’s an overview of what we took on during the two day sprint. Some projects were just for fun, others were work related!

Everyone pitched their ideas to the whole group and afterwards everyone decided on which project to work on. Teams divided into the three cosy rooms, we had prepared. ABOUT YOU offices have great chill rooms, which were great just to hang out and work on the projects in a relaxed but enthusiastic atmosphere. Mind maps were scribbled, to do lists were flying around the room, all supporting units like design and UX where passionately discussing ideas and approaches.

Since we recently implemented a totally new organizational model called MOVE in our tech departments, it was fun to see how people were really interested in new languages and techniques they hadn’t worked with before and how they greeted other developer roles in different units with high interest and open-mindedness. MOVE allows all our developers to take on new roles, learn more, go after their interests and change teams more freely. If you want to know more about our new model MOVE, read this medium post where we talk about the implementation of MOVE in our tech teams.

As soon as the backlog was finally created, it was already time for a hackathon favorite: PIZZA! We ordered tons of huge pizzas by “L’Osteria” and munched away while further discussing the approaches and ideas.

With a full stomach, we agreed on a tech stack to use and called it a day! The range of languages and tools that were used varied vastly:

The collaboration between members of all tech teams following their visions and working hand in hand was inspiring to witness.

Fresh start on the 2nd day of our hackathon! While some were still full on pizza from the day before, most of us had another breakfast together and shared our progress with the other teams. The day went by super quickly while working on the projects. We ordered lunch and everyone prepared the presentations of what they had achieved in these two days.

We had taken on quite a load of projects, but the outcome was very cool and it was exciting to see that everyone was so enthusiastic and focused on achieving a great result!

Finally, the teams presented the results to the rest of the interested staff on monday during our weekly “Tech Talk” meeting where we share insights on inhouse tech topics on a regular basis, opening the door to further discussion and input.

Did we learn a lot? Yes. Was it exhausting? Yes. Would we do it again? YES!

Thanks so much for everyone’s enthusiastic participation and see you at our next hackathon at ABOUT YOU!

Are you interested in joining our next hackathon as a new team member of our various teams?

Check out our latest vacancies!

About the Authors: Solveig Petersen and Florian Schmidt work as Lean Project Managers at ABOUT YOU.

Introducing the ABOUT YOU CLOUD

eCommerce Infrastructure as a Service

Inside ABOUT YOU — Mehrdad Backbone Unit

Get to know our growing family. Follow our Inside ABOUT YOU blog series and catch a brief glimpse of…